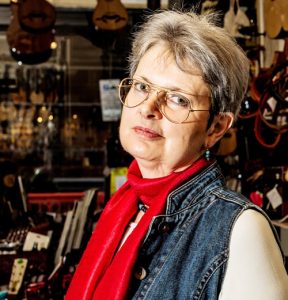 Liz Thomson is a London-based journalist who has contributed articles and interviews to newspapers and magazines around the world. A contributor to The New Grove Dictionary of Music & Musicians, she is the co-editor (with David Gutman) of quasi-academic studies of John Lennon, Bob Dylan and David Bowie, and the author of a 40-year celebration of Chickenshed, the uniquely inclusive theatre company. She has lectured at Liverpool University’s Institute of Popular Music, Kingston University, University College London and Oxford Brookes, and has been a Visiting Fellow of the Open University '60s Research Group. An occasional broadcaster, she has conducted live interviews with authors on platforms at literary festivals from Dartington to Dubai and points in between. Liz is currently a contributing editor to TheArtsDesk.com.

As Joan Baez prepares to give her final performance, Liz Thomson talks to her and traces a 60-year career filled with courage and conviction. ...

Retrospective by Liz Thomson, The History of Rock, 1983

IT WAS IN 1956 that the work of Leonard Cohen first appeared before the general public in book form, an event that marked his transformation ...

No, not Frank Sinatra but the great folk singer, Judy Collins. Liz Thomson renews acquaintance with the woman who discovered Leonard Cohen and Joni Mitchell ...