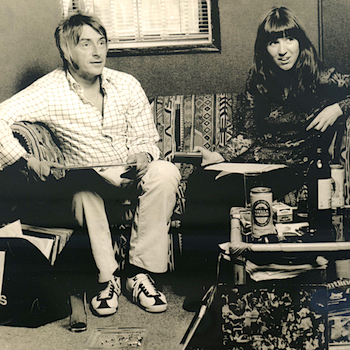 Lois Wilson (pictured with Paul Weller in 2002) worked in record and book shops and lectured in politics, philosophy and sociology before writing about music for MOJO from 1999. Soon after she became deputy editor on the late MOJO Collections and has also been published in Record Collector, for whom she does their monthly soul column, The Quietus, Planet Rock, Classic Rock Blues and more. Her fiction has been published in the Punk Fiction collection published by Portico. She has compiled CD selections for Motown, Chess and Trojan and overseen Paul Weller’s back catalogue and a series of soul related titles for the Future Noise label. She also heads People Powered concerts and is the founder of the NHS1000Musicians social media campaign. She collects Motown and Trojan 45s and 60s EPs and picture sleeves.

Kiki Dee on working with Motown, Elton John and Boots The Chemist. ...

The Dells: Stay In My Corner

From doo wop to R&B, from deep soul to Northern Soul, they are the most enduring story in vocal group history. Lois Wilson celebrates 50-plus ...

IT'S DECEMBER 1962, three sharp dressed GIs are hefting a Hammond organ down the icy steps of the Flamingo, a tiny jazz club on Wardour ...

"IT NEVER FELT like it was going to be a life-changing moment," says Robert Finley. "It was just an ordinary Saturday morning, and I was ...

Aretha Franklin: The Good, The Bad & The Queen

IT'S THE EVENING of January 24, 1967, downtown Florence, Alabama. Rick Hall, the owner of Fame Studios in nearby Muscle Shoals, is stood in the ...

Abandoned as a child, addicted as an adult, Etta James lived a life punctuated by self-destruction and "wrong-headed men". Then came redemption. As the first ...

The last word on the convicted killer and extraordinary musician who shaped the future of white music. ...

DAN PENN AND Spooner Oldham still remember the day everything changed. "I was in American Studios in Memphis working on the Box Tops," recalls Penn. ...

THE MOST FEROCIOUS BLUE-EYED-SOUL BELTER OF HIS GENERATION FORGED HIS EXULTANT VOCAL STYLE IN A BLACK CHURCH ON THE SOUTH SIDE OF CHICAGO. ELI "PAPERBOY" ...

She was one of the greatest vocalists of all time at the height of her powers but for Dusty Springfield the making of Dusty in ...

The Supremes: A Love Supreme

Mary Wilson Recalls The Highs And Lows Of The Most Successful Girl Group Of All Time. Interview By Lois "No Relation" Wilson ...

The Velvelettes: Standing in the Shadows of Motown

Lois Wilson salutes the Velvelettes, a great but neglected Motown act who are finally getting their due. ...