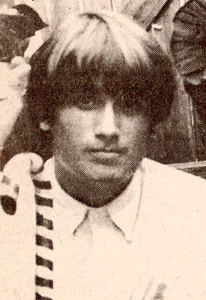 Marty Cerf got his break in magazine writing and publishing with World Countdown in 1968. Subsequently he became 'progressive music consultant' for United Artists Records, going on to publish UA's own music paper, Phonograph Record Magazine. Whilst at United Artists he also pioneered the reissuing of classic rock records, and was deeply involved in many aspects of artist and record promotion.

In 1974 Phonograph Record became independent of United Artists, and Marty kept it going until it was forced to close in 1978. Marty rapidly disappeared from sight, and died in 1994.

The Beatles: Paperback Writer: A New History Of The Beatles by Mark Shipper (Marship Publications)

BEATLEFICTION. It's so simple so obvious, it's amazing no one's thought of it till now. What, short of the re-grouped Beatles, could be more logical ...

"IT SEEMS that I've always been ahead of my time — or 'about to happen' ever since I started in the early '60s," says Jackie ...

CLEVELAND — It's a freezing night in mid-February for this city that knows no excess in terms of its insatiable hunger for pop. Indisputably, this ...

FOR THE moment there are but two titles that have any meaning for me. One is 'Tell Her No' by Del Shannon. The other is ...

URIAH HEEP may sound like a skin disease of some kind of animal manure, but in actuality it's the name of a fictional character. Uriah ...

HOLLYWOOD, CALIFORNIA — Just when we all expected it least, it happened. With our pants down, mouths wide open, Rodney Bingenheimer fulfilled the unknown pledge ...

As told to Marty Cerf and Colman Andrews... ...