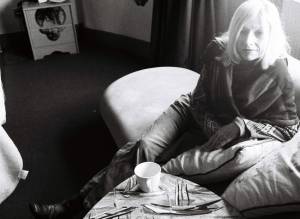 Chronicler of the fatally famous, Nina Antonia often ponders William Blake's notion that 'the road of excess leads to the palace of wisdom'. A moot point if ever there was one.

Described by author Clinton Heylin as "the partisan of decadent fuckups", Antonia has written four books: Johnny Thunders - In Cold Blood (Cherry Red), Peter Perrett -The One & Only (SAF), The New York Dolls - Too Much Too Soon (Omnibus) and The Prettiest Star (SAF), as well as contributing to Mojo and Uncut.

Pic: Nina Antonia, Brighton, January 2009, by Sam Collins.
*
Johnny Thunders: In Cold Blood, the biography of the New York Dolls guitarist and Heartbreakers lead singer by Nina Antonia, was first published in 1987 by Jungle Records, later reprinted in 2000 by Cherry Red books, and has remained a cult classic of rock biography for more than twenty years. During the writing of the book between 1982 and 1987 Nina became friends with Thunders when he spent time in London, and the balanced observations of her first biography were given a coda in her most recent book, The Prettiest Star , in which she described some of those encounters from a more personal angle. Nina is also the author of a New York Dolls biography, The New York Dolls: Too Much Too Soon. In the process of writing the book interviewed individual members of the band about the story of the Dolls short but influential career.
Announcement of biopic adaptation of In Cold Blood...

THIS IS NOT PUNK: THIS IS EDDIE COCHRAN and Gene Vincent dragged screaming into 1977. ...

IF THERE WAS ONLY ONE SONG IN THE universe and it was 'Another Girl, Another Planet', I would still have all I ever wanted. ...

From meeting up in London, Paris and NYC, via the Red Guards debacle, to catching the clap in New Orleans, Malcolm McLaren tells all about his time with the New York Dolls

An extract from Too Much Too Soon: The New York Dolls by Nina Antonia, first published by Omnibus Press in 1998. (208pp, currently available in ...

From shop boy to Sex Pistol: the Pistols' key songwriter talks about the genesis of the band, the role of McLaren, goin' down the Roxy and the 100 Club Punk Festival

The Only Ones: Another Boy, Another Planet

If you thought Pete Doherty and the Libertines were the ultimate in glorious, shambling rock 'n' roll then try THE ONLY ONES, the brilliant late-'70s ...