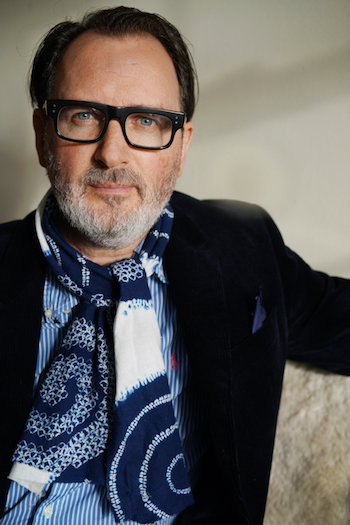 Paul Gorman is a writer, curator and commentator on visual culture. He has written for many of the world’s leading publications and his activities have included running a fashion label, The Look Presents, DJing, staging fashion shows, creating club nights, organising events such as the 2015 "Be Reasonable Demand The Impossible" festival at London’s Central Saint Martins and producing maps such as 2012’s The Look Of London and 2016’s Punk London (both with guide maker Herb Lester Associates).

• In Their Own Write: Adventures In The Music Press (Sanctuary, 2001). Foreword by Charles Shaar Murray.

• The Story Of The Face: The Magazine That Changed Culture (Thames & Hudson, 2017). Foreword by Dylan Jones.

He is currently working on an illustrated narrative version of music press history In Their Own Write for publication by Thames & Hudson in the UK and US in autumn 2021.

Gorman has contributed to major exhibitions in the UK and US and curated the following shows:

• Barney Bubbles: The Past, The Present & The Possible (Les Subsistances, Chaumont, France, 2012)

• The Look of Music, The Sound of Fashion (Copenhagen International Fashion Fair, Denmark, 2014)

Paul Gorman on the RBP podcast

PREHENSILE Monkey-Tailed Skink? Screeching Weasel? PopDefect? Anus The Menace? Never heard of 'em? You may well yet, because these are the American bands being championed ...

Cher: Daring To Be Different

CHER'S NEW ALBUM It's A Man's World may well have the most apt, albeit ironically stated, title of the year. For her first project for ...

David Bowie on the Outside

THE CRITICAL AND commercial disappointment which has greeted David Bowie's output since the crossover success of 1983's Let's Dance would have forced a less adventurous ...

FOR ARTISTS WHO came to prominence during the early '80s boom in British music, the dramatic rise in popularity of the clutch of homegrown acts ...

Home Taping Is Saving Music From The Shaggs to... Bruce Forsyth? Joe Foster’s Rev-Ola label, born of "frenzied tape-swapping," is home to all manner ...

HE’S BACK IN BLACK...again. And, as ever, he means business. Johnny Cash, the original rock'n'roll spectre lets loose the leashes with new album Unchained, covering ...

Report and Interview by Paul Gorman, MOJO, May 1995

TAKE A LIBERAL DOSE of Chicano consciousness and apply it to fully-realised musical pastiche, and what do you have? El Vez, the Mexican Elvis, no ...

ENSCONCED INSIDE her specially built Aigle Studio in the swish Dublin suburb of Dalkey, Enya pauses to explain why she chose this particular location, with ...

HE'S JUST TURNED 23, he's talented and he's handsome. He claims that Tricky's his nephew, Iggy Pop visits him in the studio and A Guy ...

IT’S BEEN SAID before but bears repeating once Iggy Pop is witnessed at the close quarters of his cramped bedroom in London’s Halcyon Hotel: If ...

"I WOULD LIKE to fuck 'er." With these six words, slurred in the heaviest of French accents, Serge Gainsbourg sealed his reputation as the scourge ...

"I LOVE MY job sometimes," cackles Bjork down the line from Miami. ...

THERE'S NOTHING the media loves more than an anniversary and David Bowie's 50th birthday on January 8 offered ample opportunity for career retrospectives and dissections ...

Cassius Clay: "Nobody is going to beat me": Cassius Clay's I Am The Greatest!

AUTHOR'S 2016 NOTE: I was commissioned to write these sleeve-notes by Joe Foster for his label Rev-Ola's 1998 reissue of I Am The Greatest, the ...

Profile and Interview by Paul Gorman, MOJO, May 1999

SOMETHING STRANGE is happening on the streets of Los Angeles. Glam-metal kids, 17 years out of date, are back walking the streets. Ambivalent Bowie-esque sexuality ...

Retrospective by Paul Gorman, MOJO, May 2000

Paul Gorman's In Their Own Write: Adventures in the Music Press (Sanctuary Press) was an oral history of rock journalism in Britain and America – ...

In His Own Right: Ian MacDonald

I INTERVIEWED Ian MacDonald for my music press history In Their Own Write in March 2001. As charming, tolerant and insightful as the first-class prose ...

FOR MANY A PUNK CHANCER, CRED comes with claims of attending the Sex Pistols' brace of gigs at Manchester's Lesser Free Trade Hall in the ...

Publish and be Damned: The Decline and Fall of the UK Music Press

WHAT’S UP WITH the music press? The once proud sector of the British media, created from the unholy union of the 60s underground and the ...

THE UNEARTHING IN central London of a series of stunning images of rock icons from the early ‘70s has sparked a search for a mystery ...

The Capri-Collared Shirt: King's Road and the birth of British punk in the late '70s

IN 1973 ONE of my older brothers, Timothy, started work at a shop called Domidium in the Kings Road, just ahead of the curve of ...

Interview by Paul Gorman, The Word, May 2004

In forty years of recording everyone from Dylan and Hendrix to Abba and Lena Zavaroni, a studio engineer sees a lot of strange things. ...

MOD'S FASTIDIOUS nature dictates that the path between purism and pedantry is oft-trod. Were the Birds arty r&b enthusiasts, more allied to the scruffy Stones ...

Book Excerpt by Paul Gorman, 'Reasons To Be Cheerful' (Adelita), 2008

DESPITE HIS WISH for anonymity, Barney Bubbles' profile was rising high in 1978 on the back of the graphic wit, invention and clarity delivered over ...

The Origins Of The Tits Tee

MALCOLM MCLAREN'S adaptation of the infamous Tits t-shirt is one of punk's most familiar designs, as applied by he and Vivienne Westwood to shirts sold ...

Mick Farren: Memories of Mick Farren: An entertaining afternoon in West Hollywood and a champagne-drenched night in Islington

Life after the NME: Nick Logan's journey from Smash Hits to The Face

Book Excerpt by Paul Gorman, 'The Story of The Face' (Thames & Hudson), November 2017

PAUSING TO MAKE his last appointment in the form of Danny Baker, fresh from punk fanzine Sniffin' Glue, Nick Logan handed in his notice as ...

IN 1975, THE regular customers at Sex – the fetish boutique operated at 430 King’s Road by Malcolm McLaren and Vivienne Westwood – included David ...