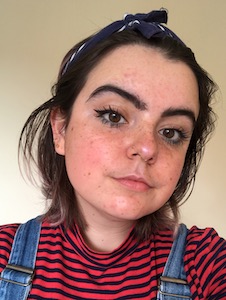 Pip Williams is a UK-based writer and editor who focuses on pop music, pop culture, and queerness' intersections with the two. Following a three year stint as Pop Editor at UK music blog The Line of Best Fit, they are currently taking some time away from music writing to focus on their day job as a veterinary surgeon (though would drop everything to interview Kesha or Florence Welch). They currently live in Manchester with their two cats and numerous plants.

Cavegreen's Vita Lucida's only problem is being over too soon

Vita Lucida is the debut album from Washington-based duo Cavegreen, and comes following 2015's Journey of Return EP. The band is composed of Eleanor Murray ...

Review by Pip Williams, The Line of Best Fit, 8 December 2017

DO YOU REMEMBER the first time you heard 'Boys'? On first listen it might not have seemed like anything special — perhaps a bit repetitive, ...

Interview by Pip Williams, The Line of Best Fit, 8 December 2016

Elder Island discuss the varied influences on their Seeds In Sand EP, including a much-missed feline friend and acid house vibes in their live show. ...

Florence + the Machine boast sincerity over spectacle on fourth record High As Hope ...

FOALS AREN’T doing too badly these days. With four studio albums and a mixtape under their belts, they're one of the biggest guitar-bands to come ...

Foxes on All I Need

KOKO IS one of London's most splendid gig venues; a converted theatre at the foot of Camden High Street that plays host to an eclectic ...

Joe Hertz talks about the How It Feels EP

Interview by Pip Williams, The Line of Best Fit, 6 October 2016

Interview by Pip Williams, The Line of Best Fit, 20 February 2017

Pop heavyweight JoJo reveals to Pip Williams some of the stories behind her third album Mad Love.  Covering everything from Wiz Khalifa to the serenity prayer ...

Cher Lloyd is bigger than the bullshit

Cher Lloyd cannot think of anything worse than taking up breadmaking in lockdown. ...

Review by Pip Williams, The Line of Best Fit, 6 February 2017

It's hard to review an album when your words just don't feel big enough. ...

Interview by Pip Williams, The Line of Best Fit, 23 February 2017

Linnea Olsson shares her own thoughts on every track of her new EP For Show, including the home-made stop-motion videos that accompany them. Overwhelmingly inspired ...

One Direction's Harry Styles and Niall Horan on their new album, Made In The A.M.; it's release clashing with Justin Bieber's; will the All Blacks win the Rugby World Cup; why they don't behave like most rockers; their responsibilities towards their fans; why Ireland didn't beat Poland in the Euro qualifiers, and their fondness for Sweden.

Interview by Pip Williams, The Line of Best Fit, 23 February 2021

Heather Baron-Gracie reflects on the creative and personal freedom she found within Pale Waves as the band celebrate the release of new album Who Am ...

Panic! at the Disco: Brendon Urie on his new album, Death of a Bachelor

Hot on the heels of his new album release, we had a chat with Brendon Urie of Panic! at the Disco. Now we've had a ...

Content warning: assault This Friday, rising queer punk duo PWR BTTM released their sophomore album, Pageant. What looked set to be a celebration of non-conformity and ...

Savages blazed into the post-punk scene in 2011, releasing the distinctive and menacing debut album Silence Yourself less than two years later. As we begin ...

Musically, Shura is an enigmatic beast. She remixed her own disco-infused pop into the echoing and eerie 'Space Tapes', and has worked with everyone from ...

We are beyond fascinated by California rapper Vince Staples, who is scheduled to bring his critically acclaimed debut album Summertime '06 to New Zealand for ...

North Carolina electronic duo Sylvan Esso open up to Pip Williams about their sophomore record What Now, and plenty more besides. Ahead of today’s release, Amelia ...

Rife with tenderness and restless energy, Free Love is Sylvan Esso at their most cohesive ...

Interview by Pip Williams, The Line of Best Fit, 30 November 2016

Electro-pop three-piece Vaults chat to us after shouldering the weight of soundtracking this year's John Lewis Christmas advert, one of 2016's most hotly anticipated releases. ...