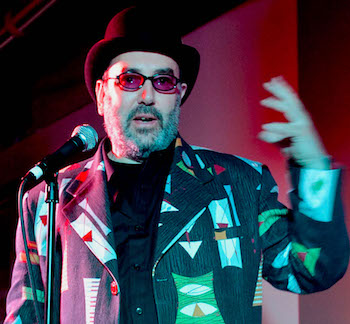 Robert Duncan was managing editor, at 22, of Creem. He's contributed to Rolling Stone, Circus and Life and is author of four books, including The Noise. He's anthologized in Springsteen on Springsteen, appears in the Ticket to Write doc, and upcoming Boy Howdy! The Story of Creem, his poems have been published in the dada journal Maintenant, and he's been singer, songwriter, producer for half-a-dozen obscure records. He grew up in a Southern family in NY and lives outside SF with the artist and photographer Roni Hoffman.

MY PERMANENT mental image of Dickey Betts comes from a photo taken on the last Allman Brothers Band tour, in which he has short hair, ...

IT IS RARE that we review something that is not yet available for general consumption. But seeing as we've been getting sneak previews of it ...

"Business art is the step that comes after Art... Being good in business is the most fascinating kind of art. During the hippie era people ...

Kiss: The Tongue Has It

OR THE GENERAL TAKES ON THE BAT LIZARD AND THE PIRATE DOG by Robert Duncan W.L.A.O.R.G.K.* ...

The fabulously flamboyant Queen frontman on 'Bohemian Rhapsody' and how it's gained them a new audience; on forming the band and getting established in the UK; on management problems and becoming more adept at business; on Queen's academic backgrounds and its blend of personalities; on his pleasure in their diverse audience; on the music press and criticism; on the 'Rhapsody' video, the band's live show and their songwriting.

DID YOU know that Keith Relf died? I didn't until last night. But I don't care. First of all, I didn't know the guy personally, ...

Todd Rundgren: Veg-o-Matic Into the Void

I WOULD MUCH prefer Todd Rundgren had a squirrelly girlfriend – you know, one of those emaciated things that is always curled up cross-legged with ...

SEEING AS how I hate Bloomingdale's with an untowards eccentric passion (due to the fact that they sell shitty shoes and dictate an intensely shallow ...

DO NOT read this if you play banjo. Or, at least, hide your Earl Scruggs and the Five-String Banjo, draw the curtains on your altar, ...

Bruce Springsteen Is Not God (And Doesn't Want To Be)

UNDERSTAND. NEW Jersey has no baseball or football teams and half of it stinks. It used to be that if you were from Jersey and ...

A love story for the whole family ...

Testimony from the Howling Dog Choir (or Tramps Like Us, Baby We're Born Again) ...

WILLY HAS just returned from Los Angeles where he has found the perfect drug. Obsessional as he is on these jags of his, after several ...

NOW, BEFORE we begin with today's lesson, I would like to relate a few facts about the synthesizer's history and the men who so valiantly ...

FOR THOSE of you who were holding your breath, sorry the column didn't make it into last issue, but we did give you that massive ...

ZZ TOP IS sort of like Communism. Apparently there's about eight million of their fans out there but you can't really tell who they are ...