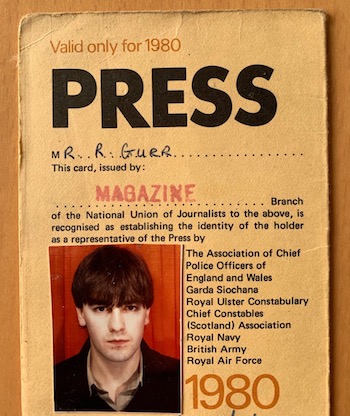 Ronnie Gurr started his punk fanzine Hanging Around in 1977. He freelanced for Trax and NME while at Edinburgh University before joining the staff of Record Mirror in 1979. In addition, he has been a press officer for Ensign, Arista and Virgin Records and worked in A&R for Virgin, Sony and V2 Records. He now publishes a catalogue of music-related photozines through his Hanging Around Books imprint.

Blondie: Have you seen your lover, baby?

RONNIE GURR, standing in the shadows with Chris Stein ...

CAMEO, ACCORDING to my tattered old Webster's, in the literary sense is — quote — "a piece of detailed writing in polished style." In the ...

EMI. WHAT gods in human form have passed through those hallowed Manchester Square portals? The tall cuboid-like lump of concrete and glass sits benignly in ...

IT'S A BRAVE new world for young moderns and, current events considered, The Human League, look like suitable candidates for the apocalyptical Titanic dance band. ...

CLIVE CULBERTSON, pugnacious bass player/singer with The Sweat leaves a half-full Marquee audience with these words: "We're The Sweat and we're gonna be the biggest ...

Motörhead: Must We Fling This Filth At Our Pop Kids

RONNIE GURR thinks we should and MOTÖRHEAD want to get even dirtier. ...

Siouxsie & the Banshees: "They said they couldn't take the pressure"

Siouxsie and the Banshees split. RONNIE GURR was on the spot ...