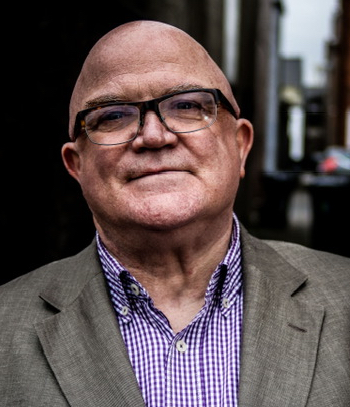 Stuart Bailie is a music writer and broadcaster, based in Belfast. His work has appeared in NME, Mojo, Uncut, Q, The Times, The Sunday Times, The Mirror, The Irish Times, Classic Rock and Hot Press. He was Assistant Editor of NME, 1992-96. He was offered out for a fight by Paul Weller, has been called "the wanker who started Blur versus Oasis" by Noel Gallagher and "a tough Nordie c**t" by Bono.

The Ballad of the Thin Man: the authorised story of Phil Lynott and Thin Lizzy (Boxtree, 1997).

Stuart has presented a weekly BBC Radio Ulster show since 1999. He has researched and scripted BBC radio documentaries on U2, Elvis Costello, Glen Campbell and Thin Lizzy. In 2007 he was Associate Producer, author and narrator of So Hard To Beat (BBC NI) – a two part documentary on the story of music from Northern Ireland. It was also shown on BBC 4.

Stuart has presented a weekly BBC Radio Ulster show since 1999. He blogs at www.digwithit.com

THE BEST thing that ever happened to Big Audio Dynamite was the Clash releasing Cut The Crap last autumn. Compared with the retarded yelpings of ...

Ian Brown: "I'm Ian Brown. I used to be in a band called the Stone Roses."

The Clash: Casbah Rock: A Death Threat against the Clash

Excerpted from Trouble Songs: Music and Conflict in Northern Ireland ...

Feeder: "Sixth-Form Poetry? We Didn't Even Get To Sixth Form."

Audrey Hall: One Hit Won't Do!

Yup, it's get out your history books time again. This here is the story of how Audrey Hall became the first female reggae singer to ...

Hot House are only on their second single, yet they already possess a soulful maturity and an "emotionally intense" singer who's been compared to Aretha ...

The Judds: a family affair

From a back porch in East Kentucky to the top of the US country charts, mother and daughter duo Naomi and Wynona Judd have come ...

The Kane Gang: Watching The Wheels Go Round

'Motortown' marks the return of Geordie outfit the Kane Gang after an absence of two years. During the interval, they've been reflective, have become more ...

Freddie McGregor: "The ladies tend to have a very close relationship with my love songs"

That's Freddie McGregor speaking. You probably haven't heard of him, but at the moment he's the sweetest crooner on the reggae scene. And he's something ...

Only there ain't no Professor 'iggins needed for Mel & Kim; fings is well and truly goin' like the clappers, they're looking forward to their ...

From juvenile delinquent to writer, producer, performer and now mother, Sinéad O'Connor is about to become a name on everyone's lips. Stuart Bailie falls under ...

Anne Pigalle: Everything Could Be So Perfect (ZTT)

ANNE PIGALLE has a pout that would stop a tank at 50 yards, and a dodgy French accent. ZTT have billed her as one of ...

British reggae's freshest star, Maxi Priest, gets stylish with Stuart Bailie, and confesses that he wouldn't mind ending up in Phil Collins' shoes ...

WHAAAH! SCREECH! Yakka yakka! They're incoming from all sides. Fierce noises from the right, altercations from behind. Just now there's a stormy advance on the ...

I WAS ALL for getting snotty about Sting's past, and his current pretensions. I wanted to grouse about the megastar menopause. You know, when our ...

LISTEN ONCE, and perhaps you'll disregard this as a dreadful racket. Listen again though, and you might well become enamoured with the inspired, intelligent mayhem ...

WITH ALL the ballyhoo surrounding the return of Matt Johnson, and the grand claims that are made about his artistic standing, coming to any judgement ...

Wilco: Being There (WEA/All formats)

THE UNBELIEVABLE MIGHTINESS OF BEING... ...