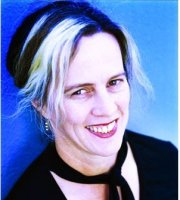 A surfing teen in Orange County, California, Susan Compo was betrayed by her writer’s nature when friends selected the Beach Boys’ 'In My Room' as her song. Glam and then punk rock further complicated matters, and she published a fanzine, Blank Generation, straight outta quintessentially suburban Tustin. A fleeting turn in the documentary DOA found Susan bubbling like a homecoming queen about the merits of the Sex Pistols’ Tulsa appearance.

During the 1980s and 1990s, Susan moved back and forth between LA and London, writing about music for Spin, Mojo and other magazines, as well as exploring its echoes in her fiction. She also furthered her passion for soccer - Duncan Campbell decried she "almost counts as an honorary Englishwoman as she is probably the only woman novelist in LA fully conversant with English soccer." She wrote for Match of the Day and later FourFourTwo magazine. Other pieces about various oddball subjects have appeared in the Los Angeles Times, the Independent (UK) and assorted travel and lifestyle publications.

Praise for Compo's fiction has come from Timothy Leary, Hubert Selby, Jr., Alex Cox, Henry Rollins and Pamela Des Barres but her personal favourite occurred when she read with Charles Bukowski in Long Beach, California. "I like you," he offered. "You’re a pretty girl with a dirty mind." Her books touch on the marginal line between fact and fiction. The first collection, Life After Death and Other Stories, featured a tale about a Cure fan that eventually prompted Robert Smith to fret over his fictional fate while reading the story in bed. She has taught writing - both fiction and non - at the University of Southern California and California Institute of the Arts, and is the author of WARREN OATES: A WILD LIFE (University of Kentucky). When asked if she wrote gonzo, she replied, "Never intentionally."

AS NORMAN MAILER ONCE SAID, "All blondes are natural blondes." Look it up in any book of pop quotes and you'll probably find a picture ...

AS NORMAN MAILER ONCE SAID, "ALL blondes are natural blondes." Look it up in any book of pop quotes and you'll probably find a picture ...

NERDY menace dogs this murky compilation, which sounds like it's coming from an eight-track player in a gas guzrler stuck beneath a muddy stream. ...

"AFTER SEEING THE extraordinary landscape of the White Sands," Nic Roeg noted, "it prompted me to think of this: strangers always see something that is ...

JULIAN COPE is even more twisted than his infamous mikestand. ...

The Cramps: World of the Interiors

Parakeets, serial killer art and "flame-jobs" at the local boneyard. Yep, it’s the return of The Cramps. ...

The Cure: Happily Ever After

After nearly 15 years as the pope of mope, the Cure's Robert Smith longs to let his hair down, watch some soccer, and read a ...

As the Happy Mondays prepare to release a live album to counteract/complement the Baby Big Head bootleg, what’s a girl with a book of post-punk ...

Interview by Susan Compo, Option, May 1992

THE DAY I interview Rowland S. Howard, a simpatico friend of mine hears Howard and Lydia Lunch's 'Some Velvet Morning' emanating, inexplicably, from the vacant ...

Lydia Lunch, currently doing the rounds with a collaborative Rowland S. Howard, is really in action Stateside, standing in opposition to the Ku Klux Klan. ...

THE PALEST SAINT, not unlike the prettiest star, has to be Saint Gerard Majella, an 18th Century Italian anchorite who, before his death at age ...

The Sex Pistols Shoot To The Top

WHEN 'GOD SAVE THE QUEEN', a song by British punk-rockers the Sex Pistols, hit the top of the English charts several months ago, it was ...

IT'S NOT SURPRISING that Britain's punk rockers, the Sex Pistols, found San Francisco "boring". The city that was to be the last stop on the ...

Siouxsie & The Banshees: The Rapture

A FEW SPEED BUMPS DOWN THE TIMELINE OF rock, past the new wave of new wave and the return of baggy, and it seems the ...

ROCK'S MOST evocative lines from the 1970s involved religion: "I am an anti-Christ/I am an anarchist". . . "Jesus died for somebody's sins/But not mine." ...

The Undertones/Hypnotised/Positive Touch/The Sin Of Pride /The Peel Sessions Album ...

FOR A COUPLE of English guys, choosing the state of Utah as the basis for their band’s name probably had as much exotic cachet as ...