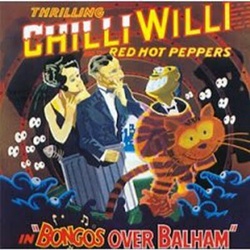 CHILLI WILLI are quite possibly the band that I spent most of 1973 searching in vain for. They have been together just a year and ...

CHILLI WILLI and the Red Hot Peppers are gonna save your soul. They're the only band in the country specialising in funky country, an area ...

Profile and Interview by Phil Hardy, Let It Rock, June 1974

A month or two ago, a jovial group of rock critics in search of a drink and some music stumbled across Chilli Willi and the ...

The Ballad Of Chilli Willi And The Red Hot Peppers

SATURDAY, 8th June 1974: NOT EXACTLY the best gig I've seen the Willis play, but one that sticks out in my memory as being one ...

MULLING OVER just how to explain why Bongos Over Balham is an important album and yet one that promises more than it delivers, I turned ...

Which is a slick way of saying The Package Tour She Lives She Breathes She Is Reborn. You remember the Package Tour, eh kids? It ...

THE NAUGHTIES OF THOSE NAUGHTY RHYTHMS ...

THE SECOND wave of '70s bands to emerge from England is an entirely opposite affair from the glitter/glam of the Mark I model. It's centred ...