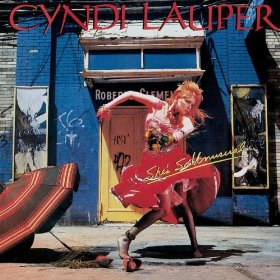 CYNDI LAUPER's old group Blue Angel made an album for Polydor Records in 1980. Given half a chance it could've put them in the Fleetwood ...

IF GOOD SINGING were its own reward, then She's So Unusual, the solo debut of former Blue Angel singer Cyndi Lauper, would be one hell ...

Cyndi Lauper has a Great Personality

Profile and Interview by Laura Fissinger, Creem, May 1984

NEW YORK — We've only got a little time here, so let's go right for the trouble spot: After a recent Lauper set in New ...

Cyndi Lauper: Would You Wrestle With This Girl?

Cyndi Lauper Bops Through The Night

PADDING SLOWLY through Burbank Airport, clutching a grey handbag and a Walkman cassette player, Lauper, at first glance, resembles a simple immigrant from "the old ...

THE BIG BOPPER was a huge slobbering lech, bursting out of his suit drooling ungodly lust. Squeezed into a phone booth he called Chantilly Lace, ...

SHE'S FEATURED her mom in most of her videos, and had her along to all the big gala awards shows too, so you get the ...

SHE WOULD HAVE been born in the back of a New York taxi if they hadn't crossed her mother's legs and stuffed her back in ...

ON THE SURFACE, Cyndi Lauper hasn't changed that much since 1983, when her debut album catapulted her to fame next to other then-newbies Madonna and ...

Interview by Scott McLennan, Rip It Up (Australia), Summer 2008

It might be hard for her to break away from the wackily tressed imagery that accompanied her 1983 global smash 'Girls Just Want to Have ...