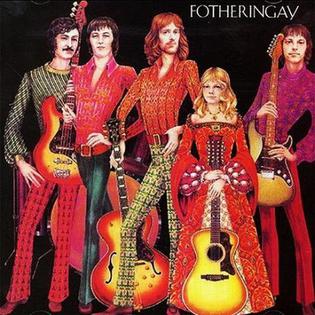 Fotheringay: Sandy and the New Band

FOTHERINGAY, the new band which has been formed by Sandy Denny of Fairport Convention and Trevor Lucas of Eclection, with Garry Conway (Eclection) and Pat ...

TAKE ONE PART Fairport Convention, two parts Eclection, and two parts Poet and One Man Band, put them in a bag, stir well and allow ...

Fotheringay: "This piece has nothing to with how to feed and handle the common house cat" — NO KIDDING?

S.W.6 IS NOT exactly the celebrated home of the hip, but this piece is not designed to specify popular vicinities of London. Nor is it's ...

IT IS EASY to forget that pop, nowadays, has become an organic process. The music industry is still mostly in the hands of people whose ...

Fotheringay, The Sea and Sandy Denny

A FEW months ago Fotheringay was a pretty name for a group of musicians who happened to play together. Today it is the name of ...

PUTTING ELTON John second billing to Fotheringay at the Royal Albert Hall on Friday night was a taste of mistaken booking if ever there was ...

Revered by everyone from Frank Zappa to The Spice Girls. Led Zeppelin's one and only guest star. One of Britain's greatest singers. Yet her true ...

Sandy Denny: "I don't think she ever gave the future the time of day…"

When Sandy Denny left Fairport Convention at the height of their success, she seemed destined for solo stardom. What went wrong? With the help of ...