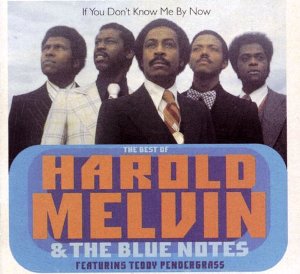 EVERY YEAR, there are only a handful – maybe six – records which go on to become all-time personal favourites, records that get played at ...

WELL THEY didn't quite make it with another killer. There's probably some slyly subtle reason why it was felt appropriate to put 'Cabaret' on the ...

THIS EXCITING album by a veteran group (so experienced in working together they seem to anticipate each other's moves) is characterized by masterful use of ...

Harold Melvin: Wake Up Everybody

Is Teddy or David the Real Harold Melvin?

WITH THE rumored schism between Harold Melvin and lead singer Teddy Pendergrass, the current status of the Blue Notes seems to be in limbo. Though ...

Harold Melvin & The Blue Notes: Wake Up, Everybody (Philadelphia Int.)

'Wake Up Everybody'/'Keep On Lovin' You'/'You Know How To Make Me Feel So Good'/'Don't Leave Me This Way'/'Tell The World How I Feel About 'cha ...

The Manhattans vs The Blue Notes: Hammersmith Odeon, London

THEORETICALLY this bout should have provided at least a points-win decision in favour of Harold Melvin's Blue Notes, although, owing to recent personnel upsets in ...

Harold Melvin and Blues Notes: The Inside Story

The Blue Notes split was one of the big Soul stories of '76. Harold Melvin talks to John Abbey and gives the lowdown on what ...

CURRENTLY fulfilling all the promise he's ever shown when with Harold Melvin & The Blue Notes with a flourishing solo career, we took a little ...

Harold Melvin and The Blue Notes: Back To Their Roots

The rumours are that Harold Melvin and the group are set to return to Philadelphia International. Harold himself tells B&S how it is.... ...

The Sound of Philadelphia

Sweet Philly soul has influenced the likes of Erykah Badu, the Roots, David Bowie and more. Michael A. Gonzales delves into the1970s sound. ...

CELEBRATING BLACK MUSIC MONTH WITH SOME OF THE STANDOUTS OF R&B, SOUL AND HIP-HOP, MICHAEL A. GONZALES REMEMBERS THE LATE, GREAT TEDDY PENDERGRASS ...