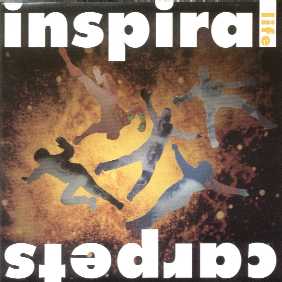 WOWEEE, TRIPPY BABY — the far-out scene jumped into the time machine, shed all its colour and mind-exploding drugs, and leapt into the 1980s. ...

IF THE WEDDING PRESENT ARE SMITHS' FANS SECOND FAVOURITE GROUP, THE INSPIRALS ARE PROBABLY THIRD ON THE LIST. EARLIER THIS YEAR, THE MANCHESTER BAND LOST THEIR SINGER ...

Two years ago, Oldham's Inspiral Carpets were just about filling the Cricketers pub in South London. This spring, their album Life sold over 200,000 copies ...

Inspiral Carpets: Wish you were here

It’s a sun-kissed "no-lose situation" for Inspiral Carpets. Surfing on the stupendous sales of their shock-the-vicar T-shirt selection, and equipped with a user-friendly record deal ...

Profile and Interview by John McCready, Face, The, August 1990

ELECTRONIC. TEUTONIC. Independent. European. Regardless of the reality of its catalogue, Mute Records has a certain image. Like any record label with a desire to ...

THE MUTANT HERO TURTLES HAVEN'T HIT JAPAN YET, BUT FOR THE MOMENT THE LOCALS ARE OBSESSED WITH A DAFT LITTLE COW WITH SPIRALLY EYES. WE ...

INSPIRAL CARPETS are not just another band from Manchester, England, the city that's become one of the most exciting music centers on earth, home of ...

The Stone Roses and Happy Mondays: What The World Is Still Waiting For?

It was the scene that produced some of the best bands the world had ever seen. Now, with the Happy Mondays reforming end The Stone ...