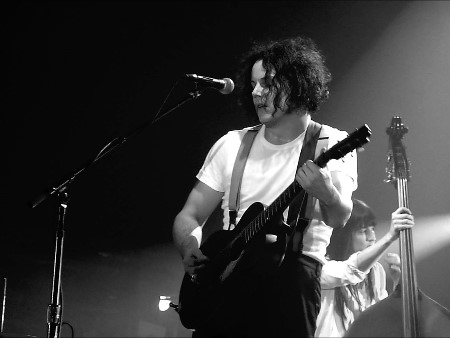 The new Raconteurs album is to be released without pre-publicity. Is this a gesture of fairness to the fans, or an attempt to silence the ...

"There's a Voice in Me Saying Slow Down": Jack White Looks Back

WE'RE COMING to the end of a punishingly intense set by the Dead Weather, the second side-project band formed by Jack White of the White ...

Riveting doc about the magical powers of the electric guitar, starring Jack White, Jimmy Page and the Edge. ...

When In Rome… with Danger Mouse, Daniele Luppi, Jack White and Norah Jones

Interview by Alan Light, Relix, May 2011

ATHENS, GEORGIA IT'S 1995, maybe 1996. Brian Burton is a freshman at the University of Georgia, an aspiring moviemaker, taking an "Introduction to Film" course. Burton ...

Review by Dorian Lynskey, The Word, May 2012

Jack White certainly isn't gunning for his ex, but their split seems to have fired some of his most riveting work yet ...

What's Jack White made of?

White never stops working and everything he works with turns to gold. ...

The former White Stripes leader takes his first solo album through Memphis for soul and Nashville for honky tonk. Many of the album's songs are ...

Late on Wednesday night, Jack White's fans were summoned to a dark 'medical research centre' off the Strand for a sinister immersive theatre show with ...

Manna for Fans: The history of the hidden track in music

WHO DOES Jack White think he is? Well, judging by the cover to Boarding House Reach, a smoothly airbrushed simulacrum of Keanu Reeves, which rather ...