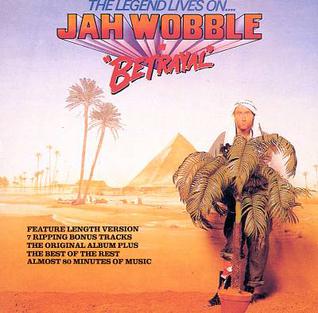 PERHAPS THIS IS a disingenuous flash of hindsight on my part, but I'm convinced that when I heard Public Image Limited's first album, back in ...

Jab Wobble At Your Service

The Entertainer as Servant of the People. Chris Salewicz talked to the former Public Image bass player. ...

ON THE first bright day of '82, two tramp-like figures lounge on a bench outside the South Bank complex overlooking the Thames. The sun is ...

Richard Cook meets the musical Nomad Jah Wobble who has now found the Arab in himself but not stardom. "I'll never be a big pop ...

STATELY, PLUMP Jah Wobble came from the stairhead, bearing a bottle of lemonade from which the label was peeling. A blue jean jacket, ungirdled, was ...

"JOHNNY ROTTEN telephoned me within hours of splitting The Sex Pistols," begins Jah Wobble, acknowledging the fact that there's a fascinating background story to tell ...

An out-mind experience with the extra-dimensional Andrew Weatherall and Jah Wobble, the man for whom the expression "raving mad" was invented... ...

IN THE grey area between barrow-boy techno and lumpen flannel-rock, there exists a community of enthusiasts who refuse to let their output be dictated by ...

Jah Wobble's Invaders of the Heart: Take Me To God (Island/All Formats)

Report and Interview by Stephen Dalton, The Times, August 2004

THE LAST time Jah Wobble got into a public punch-up was half a decade ago, squaring up to a street gang on his East End ...

JAH WOBBLE THUDDED into the public consciousness in a flurry of violence. He reportedly pulled a knife on NME's Nick Kent while Sid Vicious chain-whipped ...

Jah Wobble: The Bass Leviathan, In His Own Words

How would you describe yourself... ...