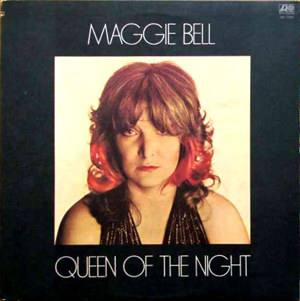 Maggie Bell: Queen of the Night

MAGGIE BELL'S first solo album is with us at last. It's been a lengthy wait and there have been countless rumours concerning who would be ...

MUCH LOVED Maggie is back in action, and ringing changes in her career that will reverberate around rock. Miss Bell has been quiet in the ...

MAGGIE BELL, Queen of the Night, is emerging from the dark. She's been off the stage now for over a year, commuting back and forth ...

For months they've laid low in the recording studios preparing their sixth album. But suddenly the whole world was watching as the Christmas season brought them a ...

Maggie Bell: Queen Of The Night

THIS REVIEW WAS planned as a joint one, intended to incorporate new albums from Carole King, Buffy St. Marie and other notable women artists. However, ...

The Ghost and Maggie Bell ...

With a background in wrestling, it's not surprising that Peter Grant is cast as a heavy. And as manager of Led Zep, the legend has ...

OKAY, FIRST things first. When Maggie Bell's done a few more gigs (and maybe even a couple more rehearsals) with her new band, then there's ...

IT'S CURIOUS that Maggie Bell still hasn't got her name up there in lights. ...

WHILE NOT A debut album, Suicide Sal is the LP that signals Maggie Bell's arrival as the fine, powerful singer we had been touted to ...

Maggie Bell: At last the Blues pay off for Maggie

MAGGIE BELL is currently enjoying her first hit single, which is surprising for someone voted Britain's top female singer in 1972, 73 and 74. ...