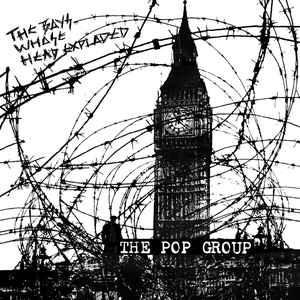 Introducing eh?! and the enigmas ...

PARDON ME if I've misunderstood, but amongst all those pretty speeches and petty let-downs didn't somebody once ask for 'new music night and day'? And ...

Disorder by juxtaposition. Subversion by paradox. Nothing is as simple as we're told. New feelings. ...

The Pop Group/Nico/Linton Kwesi Johnson/Cabaret Voltaire: An Appraisal Of 'Next Year's Thing'

RACE TODAY magazine/organisation, acknowledging the central importance of Manchester in the struggle of black people, launched their northern campaign with a fund raising "Creation For ...

The Pop Group: First Steps In The Primal Skank

Tribal customs live on, even in the era of Afterpunk. RICHARD WILLIAMS investigates The Pop Group. ...

We Know There’s Something Wrong Somewhere: The Pop Group

This and other astute observations on life, art and the consumer society in THE POP GROUP interview. ...

This is the (Penguin classic) modern world ...

THE POP GROUP. An enigmatic name. Not so much ironic as is often claimed, more plain cheeky. ...

The Pop Group: Idealists in Distress

They are young. They are talented. They are committed. They are now without a record company. 'So what seems to be the problem, boys?' asks ...

THE TRADITION of the angry young idealist, full of righteous fervour, self-righteous condescension towards those at odds with his or her volatile beliefs, and a ...

The Slits, The Pop Group: Roll On, Sartre's Marbles!!

THE SLITS: 'In The Beginning There Was Rhythm'/THE POP GROUP: 'Where There's A Will There's A Way' (Rough Trade) ...

The Slits, The Pop Group: Rough Justice in the Court of the Purple Paragraph

Following a more-than-rigorous analysis of the last Slits/Pop Group single, the twin terrors of Rough Trade challenged Ian Penman to a verbal showdown. This is his ...

The Pop Group: We Are Time (Y/Rough Trade)

THIS COULD have been a great record. On paper, it seemed to be a handful of The Pop Group's strongest suits. ...

The Pop Group: The Politics of Dancing

Profile and Interview by Nick Hasted, The Independent, 29 October 1998

THE POP GROUP'S life was brief and fierce. Begun in 1978, collapsing in 1980, the Bristol teenagers' insertion of black funk, free jazz, dub and ...

FORGET ABOUT THE NOSTALGIA-MONGERING AND KITSCH REVIVALISM – THE POST-PUNK PERIOD OF 1979-81 WAS AN ASTONISHINGLY FERTILE TIME FOR BRITISH MUSIC, WHEN INDIE LABELS FLOURISHED ...

The Oral History of the Pop Group: The Noisy Brits Who Were Too Punk for the Punks

While London was calling, these Bristol teenagers responded with dub, avant-jazz and noise — and inspired everyone from Nick Cave to Nine Inch Nails. ...

Have the Pop Group finally become a pop group?

Retrospective and Interview by Paul Lester, The Guardian, 26 February 2015

Bristol's post-punk provocateurs have released Citizen Zombie, their first album for 35 years. In 1975, they drew on dub, free-jazz and Baudrillard; 2015 finds singer ...