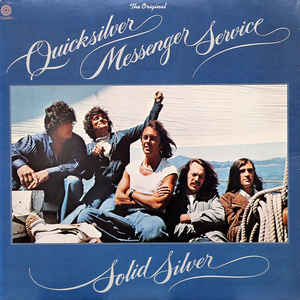 WELL, THE GREAT name of Quicksilver Messenger Service is resurrected yet again, this time with perhaps more credibility than on previous occasions. A sticker on ...

Some Real Flying In the Fillmore ...

YUMMY YUMMY: Quicksilver Messenger Service, yet another highly respected San Francisco group, are really too much. We've heard their name ever since the very beginning ...

INTROSPECTIVE exploration of themes is the general idea on this album from one of America's top underground groups. ...

Quicksilver Does A Quickchange

ON THE NEW Year's Eve separating 1968 and its successor, the Quicksilver Messenger Service played a farewell concert at Fillmore West. Looking back at the ...

I WAS ON that New York trip last weekend, too. My brief was to listen to the music. I have to report that as soon ...

BRINSLEY SCHWARZ is an unknown British group that aroused interest because over 100 U.K. journalists braved a 12-hour trouble beset trip from London to spend ...

Quicksilver Messenger Service: What About Me (Capitol)

QUICKSILVER displayed acute weaknesses on their previous album and they remain very much in evidence on What About Me. Though the group has polished up ...

Nicky Hopkins: Have Piano, Will Travel

THE ONCE-FAMOUS logo, "May the Baby Jesus Shut Your Mouth and Open Your Mind," has been supplanted by an outsized plastic marquee proclaiming ‘Summer of ...

DINO VALENTI had a pretty good niche in history carved out for a while: he wrote (or at least claimed to have written) 'Hey Joe', ...

SUNDAY’S KGB "Charity Ball" was important for one reason: the concert proved that people in large numbers can still come together for an event and ...

Quicksilver: Trouble Ahead, Trouble Behind

JOHN CIPOLLINA, he's the real thing. Smallish, wiry, hair tied back, nicotine stains up to his elbow and the confident loquaciousness of a man who ...

YOU MAY REMEMBER Quicksilver Messenger Service as one of the most enigmatic West Coast bands from the acid-soaked sixties, and not just because they never ...

School of Rock: Monterey to Altamont

BETWEEN 1966 and 1970, there was a seismic change in British and American pop. Within a few short years "pop" became "rock", and teenagers who'd ...

GARY DUNCAN, guitarist and vocalist of the San Francisco rock band Quicksilver Messenger Service, died on June 29 at the age of 72 after suffering from a ...