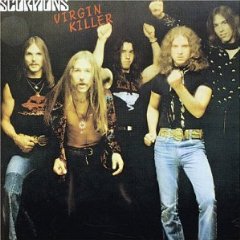 NOW THAT the new wave has been institutionalised and tamed by the Establishment, heavy metal is once more basking in a glorious and celebrated comeback, ...

Scorpions: Stateless and Fighting Back

German heavy metallurgists Scorpion, fronted by ex-UFO lead guitarist Michael Schenker, are set to conquer the world the English-speaking one, that is. HARRY DOHERTY talked ...

HEAVY METAL at its stalest has few rivals in the all-time tedium stakes. Monsters of Rock, recorded live at Castle Donington in Britain, is not ...

The Scorpions: Boom! Boom! Out Go The Lights

HERE WE are in Spain – San Sebastian to be precise. Poli de Portivo is the name of the venue and the Scorpions have just ...

IF, AS JAH ROTH says, there's a little bit of Van Halen in everyone on a Saturday night, there's likely a whole lot of Scorpions ...

The Scorpions: From Europe To Video Domination

AFTER SPENDING virtually all of 1984 on the road, rocking fans on four continents, you'd think Scorpions needed a break. So they did, and they ...

Scorpions: Around the World

IT TOOK THE Scorpions more than a dozen years to do it, but there now remains no doubt that the Hannover, West Germany-based rockers have ...

Scorpions get set to scorch

THE SOUND remains the same! The clipped Teutonic tones winging their way across the wire from Germany herald the return of Germany's biggest, the Scorpions, ...

ADMIT IT — most of you would no sooner listen to metal than volunteer for root canal work. Metal is nasty, noisy, brutish, the kind ...

The Scorpions' Rudolf Schenker: An Interview

One of metal's most enduring and successful bands, The Scorpions have been taking their German bred metal to the masses for over 35 years now. ...