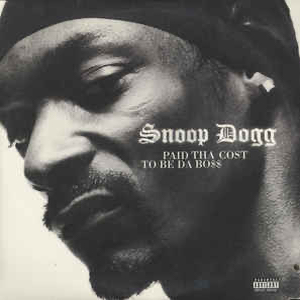 CULTURE ALIENATION, boredom and despair: such are the imperatives of Snoop Doggy Dogg's world. ...

DR. DRE ISN'T a good advertisement for music school. "With all these players out here, why should I waste this much time learning how to ...

Profile and Interview by Caroline Sullivan, Guardian, The, 12 February 1994

To Snoop Doggy Dogg, the hard man of rap, women are 'bitches' and 'niggaz with attitude' like him pack a pistol. CAROLINE SULLIVAN talked to ...

SNOOP IS in the house, and so are we, finally. The pre-match build-up is a work of art, a triumph of modern mythology and marketing. ...

Who's a busy homeboy then? His CV already bulges with a prison sentence, a US Number 1 LP and a still-fresh murder charge. Now, gangster ...

SNOOP DOGGY Dogg, born Calvin Broadus, was brought up by his mother in the working-class suburb of Long Beach, Los Angeles. From early adolescence, when ...

Now Is Not The Time To Talk To Snoop Doggy Dogg.

Interview by Angus Batey, unpublished, May 1994

Originally written for the NME, this article was not published ...

Live Review by Caroline Sullivan, Guardian, The, 2 May 1994

Snoop Doggy Dogg comes over like a pup at the Brixton Academy ...

THEORY HAS IT that an artist gets the audience he deserves. So what the f*** the theory would make of Snoop Doggy Dogg at Brixton ...

A HOT South London night. The air is a heady mix of sweat, liquor, perfume… and bomb-ass skunk. Inside the Academy, a veritable ceremony is ...

Snoop Doggy Dog and Dr Dre: Every Dogg Has His Dre

Report and Interview by Dele Fadele, New Musical Express, 14 May 1994

They called him an "evil bastard", said he shouldn't be allowed in the country, that there would be riots outside his hotel and gigs. But ...

WHEN YOU think about it, the very fact that this gig took place at all seems more than a little miraculous. With one of the ...

SIMON PRICE meets SNOOP DOGGY DOGG, the Most Famous Rapper On Earth, whose murder trial comes up in three months, and asks him about Life ...

Report and Interview by William Shaw, Observer, The, 7 July 1996

New York can lay claim to having invented rap, but LA has violently rewritten the rules. William Shaw charts an increasingly bitter rivalry ...

Profile and Interview by David Bennun, Guardian, The, November 1996

"I'M GONNA live forever," says the man slumped in the chair opposite, his voice so soft it's barely more than a mumble. Nobody has ever ...

Rap: Large and In Charge

Rap hasn't merely survived the shocking deaths of hip-hop leaders Tupac Shakur and Notorious B.I.G. It's thriving now, thanks to a fresh infusion from today's ...

Snoop Dogg: Da Game Is To Be Sold, Not To Be Told (No Limit)

IT'S ONE OF THE most depressing stories in pop music. ...

WHEN SNOOP DOGG released his Da Game Is To Be Sold, Not To Be Told album last autumn, more than just the Doggy part of ...

His rise and his fall has been a story of violence, pig-headed machismo and ruthless determination. Currently biding his time in jail, Death Row boss ...

IN WHICH THE meanest mf-ers in contemporary hip hop, now wallowing in a gargantuan trough of dollars, give themselves 10 times more than enough rope, ...

"What is it about the gangster mythology...that grabs those of us, especially men outside 'the life'? What is about guys like (the late) John Gotti, ...

HIGH IN THE Hollywood Hills, at a barbecue held to celebrate the release of his latest album, Snoop Dogg is deep in conference with his ...

A fine X to mark this spot in Snoop's always interesting career. ...

see also Lady of Rage, The