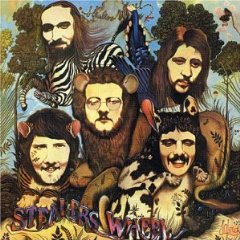 Gerry Rafferty is a lunk. He put together a fine group, cut a lovely album and then split. It's the most lunatic thing since Dave ...

YOU'VE PROBABLY discovered by now that ‘Stuck in the Middle with You’, the single you thought was the best Dylan record since 1966, is actually ...

JOE EGAN used to be in a band called the Mavericks. Nothing much, just a young band from Paisley, a tough industrial town on the ...

WITH FERGUSLIE PARK, Gerry Rafferty and Joe Egan are back as Stealers Wheel. Considering that the duo is unencumbered by the band's former members (with ...

Stealers Wheel: Down to Two And Enjoying It

LONDON — Ferguslie Park is a housing development in Scotland where Gerry Rafferty and Joe Egan once lived. The long-time friends are now the sole ...

THEY STARTED a bit more than three years ago as a sort of supergroup of Scottish songwriters, and for the next couple of years changed ...

GERRY RAFFERTY rarely comes up in interviews, seldom works on the road and is in London even less often. And yet when it comes to ...

Singer and songwriter known for 'Stuck in the Middle With You' and 'Baker Street' ...