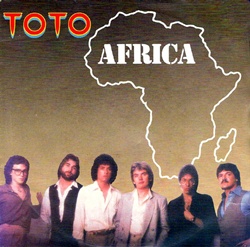 THIS COULD HAVE BEEN an unholy disaster. A group of Los Angeles session men forming their own band could have been the signal for God-knows-what ...

DAVID PAICH has the grizzly, rough-hewn features of a particularly underhand heavyweight wrestler. The image is blown by a hugely infectious grin that recurs frequently, ...

WILL THESE people never learn? In the time-honoured Hollywood tradition of foisting ambitious super-sessioners upon that large portion of the American public bereft of a ...

A THEORY was circulating during the last two or three years to the effect that the acts dominating the US album charts, and therefore the ...

Toto's Eclipse of the Art

HAVE WE PERHAPS witnessed the last hurrah for the mega-selling studio-musos-cum-touring-phenoms Toto? According to guitarist/vocalist/co-founder Steve Lukather, "we're winding it down. This DVD [Falling in ...

More Than a Feeling: The 20 Greatest AOR Tracks of All Time!

Author's Note: I have found that most discussions of AOR get easily sidetracked unless it's made clear which definition of the AOR acronym we're using. ...