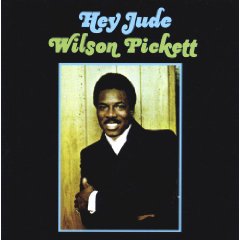 "I WAS SITTING on the front porch picking at my guitar and singing. This neighbour boy came up and asked me to play some more. ...

FRANK FENTER is a tall, tanned, talkative South African who has a way of expression with his hands that would do credit to an Italian. ...

AS WE WALKED into Wilson Pickett's dressing room at the Apollo in New York, two shady characters were in the process of selling a freshly ...

The Humor of… Wilson Pickett

WILSON PICKETT started his singing career in the spiritual field in the city of Detroit. He and his family moved there when Wilson was in ...

JERRY WEXLER is without doubt, one of the great producers who revolutionised Rhythm and Blues music in the 50's and 60's. ...

Wilson Pickett: In Philadelphia (Atlantic) and If You Need Me (Joy)

Review by Charlie Gillett, Cream, May 1971

IT SEEMS AS if Wilson Pickett's been the number two soul singer ever since the term was coined. Ray Charles, James Brown, Otis Redding, and ...

EX-TEMPTATIONS man, Eddie Kendricks, now solo, was due to open and debut his act at The Apollo but at the eleventh hour he cancelled out saying "the ...

CAN YOU imagine seeing Wilson Pickett at the Talk of the Town in London, complete with middle-aged folks having a night out, coach parties from ...

WILSON PICKETT is back — as big and brash as ever, and if his press reception this past week at WEA Records (nee Kinney) is ...

Wilson Pickett: Join Me and Let's Be Free

FIRST OF ALL you have to picture the scene. There he stands, up to his elbows in stagnant water, a faraway look in his eyes, ...

Return of the Wicked Pickett

IN GUY PEELAERT'S Rock Dreams tome of some six autumns back, one of the artist's strongest slices of visualized popular music imagery went under the ...

Report and Interview by Ted Drozdowski, Boston Phoenix, The, 18 October 1999

THE HOWL is unmistakable. Raw as fresh meat, gritty and powerful as sandblasting. That's Wilson Pickett shouting thunder over the fatback grooves of a new ...

Wilson Pickett: Singer who revolutionised the sound of '60s Soul

IN 1964 Wilson Pickett, who has died of a heart attack aged 64, was signed by Atlantic Records of New York. It was an era ...

Wilson Pickett: you couldn't sing 'In The Midnight Hour' the way he did without a terrible temper and in this respect the man from Prattville, ...

ON MAY 11, just a few days after Pickett's unexpected Apollo headline billing concluded, and with the surprise baby newly ensconced at home, he and ...

Tony Fletcher: In The Midnight Hour – The Life & Soul Of Wilson Pickett

ABUSE RUNS in the family, or so they say. Those ill-treated as children go on to ill-treat as adults and it's near impossible to break ...

Wilson Pickett often cut a controversial figure; he was tough, brash and volatile. But he was also one of the great soul singers, and could ...

Tony Fletcher: In The Midnight Hour – The Life And Soul of Wilson Pickett (Oxford University Press)

BACK IN THE mid-1960s, Wilson Pickett was one of my main men. A series of great singles waxed for Atlantic, including 'In The Midnight Hour', covers of ...