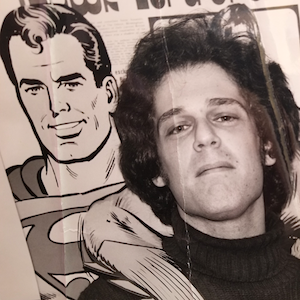 I wrote the Detroit and Philadelphia chapters of Blackwell's Guide To Soul Recordings and have written about music for many years; my Village Voice review of one of Bruce Springsteen's earliest New York shows at Max's Kansas City in 1973 was quoted in Will Hermes' book Love Goes to Buildings On Fire.  My name was also quoted as the "reviewer" of the Nasty Bits' show in the final episode of HBO's Vinyl.  I have also produced and/or annotated many blues, soul and jazz reissue projects going back to the 1970's, for such labels as Chess, Savoy Jazz, Ace and Night Train. I was a staff writer with Atlantic Records' publicity department from 1978 to 1980. In the early '80s I was a staff reporter for music trade publication Cashbox. I also used to do some film-extra work in the mid '90s and was directed for one day by Martin Scorsese in Bringing Out The Dead (twitching junkie on the couch in the "apartment" scene).  During the punk rock days my band Razors Edge opened three nights for Blondie at CBGB (Valentines weekend February 1976) and we also opened shows for the Dictators, among others.

A LOT OF British heavies on the order of Led Zeppelin, Humble Pie, and even Elton John came out of the soul club tradition, learning ...

Bobby Bland was one of the most beloved blues (and soul) singers of the '60s and '70s, an influence on rock vocalists from Rod Stewart ...

AS THE FIRST in a four-concert series, the Rutgers Institute of Jazz Studies presented Chick Corea and Return to Forever last Friday at the Carnegie ...

THIS IS the best soul dance record in years. It cuts directly against the grain of most black music today, which strives for that sophisticated, ...

MUSIC HAS taken its place with dope and women as a reason for coming to Harlem. Especially these bleak days, it's an emotionally regenerative experience ...

I WONDER WHAT the regular Apollo Theatre audience thought when they saw a contingent of 20 or so white writers (limoed all the way from ...

The Guess Who Battle Obscurity With Flavours

They're probably Canada's most influential group aside from The Band. Now, after nearly a decade of hit-making, the Guess Who are fighting to prove their ...

Kiss: "Big Bands Hate Us 'Cause We Steal Their Audiences"

MOTT THE Hoople is a British all-rock band, 'All the Young Dudes' of course. But they're about to break really big, with 'Honaloochie Boogie' already ...

Wilson Pickett often cut a controversial figure; he was tough, brash and volatile. But he was also one of the great soul singers, and could ...

WITH THE arrival of Meddle last year, even Pink Floyd's most ardent followers must have found themselves wondering if the group hadn't outlived themselves. The ...

The Rolling Stones: Stones Launch Onslaught '75 With Made In The Shade

Roaring through the sun circuit, the Kings of Cool have set America buzzing with the might of a million locusts. ...

EVERYBODY GRUMBLES about Max's for some reason, but most of us keep climbing through the dark to the top of the stairs once or twice ...

Sweet But Not Saccharine