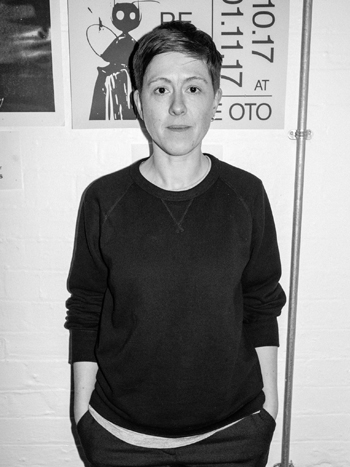 Frances Morgan is a music writer and editor based in London, who began writing for zines as a teenager in the 1990s. Frances was the editor of Plan B magazine, which was co-founded with Everett True in 2003, and is currently a contributing editor (formerly deputy editor) at The Wire. In 2012 Frances began writing 'Soundings', a monthly column about film soundtracks, music documentaries and sound design, for Sight & Sound magazine. Frances’s writing has also appeared in Frieze, NME, Careless Talk Costs Lives, New Statesman, and various academic journals.

OOIOO: Be Sure To Loop

Profile and Interview by Frances Morgan, Plan B, June 2004

FOUR JAPANESE women are running through the Camber Sands car park, wrapped in dresses and blankets and ponchos, straight hair blowing in the east wind. ...

MY MEMORIES aren't sepia-tinted; they're midnight-blue and smile-white, fleet-footed but with ash on my toes and holes in my tights where I kicked off my ...

Profile and Interview by Frances Morgan, Plan B, September 2004

Joanna Newsom is a new kind of folk heroine, plucking out spells and lullabies on 46 thrumming strings. ...

Profile and Interview by Frances Morgan, Plan B, February 2005

HE'S SINGING guide vocals, marking the chords on a chiming Gibson. Wordless lilts warm him up and take us down; sweet meetings of finger and ...

Tusk: Tree Of No Return

THE LINE between my eyebrows deepens, furrows, branches into tiny new rivulets of experience. My ear canals are bruised and my perfect pitch flattened (by ...

WE WERE LATE, and lost. We took the lift and arrived at the wrong floor. I asked a white-shirted boy where the band were. Which ...

Live Review by Frances Morgan, Plan B, May 2005

FEBRUARY WAS so cold it was almost fun. Snow whipped round the corners of buildings, full in your face. Under the railway arches, I found ...

Chrome: Half Machine From The Sun (King of Spades)

CHROME's Alien Soundtracks and Half Machine Lip Moves were released in 1978 and 1979, which makes them contemporaries of Mad Max, Philip K Dick's VALIS, ...

ROBBIE BASHO's singing is sometimes written about as if it's a rather regrettable aspect of his work. ...

The Soft Pink Truth: Why Do The Heathen Rage? (Thrill Jockey)

I ONCE SAW Drew Daniel in his Soft Pink Truth guise provoke such a negative response from an audience member that he must have been ...

Various Artists: The Barley Mow: Field Recordings And A Film Made In Suffolk In The 1950s Various Artists/Topic /The Flax In Bloom: Traditional Songs, Airs ...

Cut Hands: Festival Of The Dead (Blackest Ever Black)

As a member of Micachu And The Shapes, Mica Levi was an archetypal underground pop star — then she wrote the soundtrack to Under The ...

The grand drama of the latest Björk album reveals command of texture and mood as her survival mechanism. ...