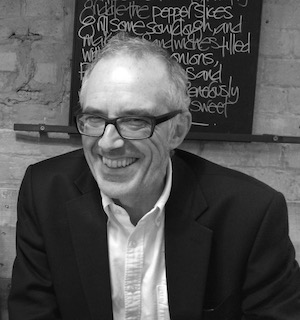 John L. Walters is a journalist and composer, who once wrote a tune that people whistle. He has written about different genres of music for mags and newspapers, notably The Guardian, for whom he wrote a column for five years. He has been the (award-winning) editor of Eye, the international review of graphic design, since 1999, and its co-owner since 2008.

After university he formed Landscape, who gigged extensively, released EPs on their indie label and pioneered computerised synth-pop. 'Einstein a Go-Go', featuring Walters' Lyricon melody, was a top 5 hit.

He reinvented himself as a journalist, working for the Sunday Times and Architectural Review before joining Eye, and writing for The Wire, Jazzwise, The Independent and The Guardian. Since 2014 he has also edited Pulp, which Eye makes for Fedrigoni Papers. Career highlight: joining Charlie Gillett twice for 'Radio Ping Pong'.

CHÁVEZ RAVINE is Ry Cooder's What A Carve Up, a multilayered song-cycle about the way a Hispanic neighbourhood of Los Angeles was cleared to make ...

Miles Davis wouldn't have wanted his out-takes made public, so why all the box sets? ...

Moondog: The Viking of 6th Ave: The Music of Moondog

Presented by the Barbican and Eat Your Own Ears; part of Only Connect ...

MY FIRST encounter with Kip Hanrahan was when someone at Pangaea, his record company, handed me a copy of Days and Nights of Blue Luck ...

THE BLACK-AND-WHITE Esquire photo of 57 jazz musicians (plus a few local children) posed in front of a Harlem brownstone on 12 August 1958 is ...