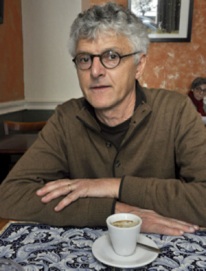 In the latter part of the 1970s, Steven worked at Island Records, writing artist bios and press materials for a roster that included Bob Marley, Toots and the Maytals, Steve Winwood, Brian Eno, Bruce Cockburn, Robert Palmer, Michael Nesmith and Richard Thompson. In the early 1980s he was an associate editor at Oui magazine, then a part of Hugh Hefner's Playboy publishing empire. Steven edited the arts section at Oui.

Since 1982, Steven has been on the staff of the Philadelphia Inquirer, first as a general assignment writer covering popular music, movies, books and whatnot, and, since the mid-1990s as one of the Inquirer's film critics.

THIS IS THE Incredible String Band's ninth album (tenth, if you include the soundtrack to their film BE GLAD...), and their first in over a ...

The Incredible String Band Ascending To The Stars

God made a song when the world was new, waters' laughter sings it true, O, wizard of changes, teachme the lesson of flowing — Robin Williamson ...

Jesse Colin Young: Trying To Be A Good Highway

WE DROVE our '54 Chevrolet along the road to Inverness on the Point Reyes peninsula quickly, somehow feeling threatened by the grey, heavy clouds that ...

THIS IS BASICALLY just a review of one song on Countdown To Ecstasy. I mean, the rest of the record is fine, the lyrics are ...

JONI MITCHELL has finally accepted stardom and all the craziness that goes with it. During her Memphis appearance she still revealed her female submissiveness on ...

The Intricate, Tongue-Twisting Babble That Is Plastic Bertrand ...

"I'LL BET YOU that if I played Las Vegas, Don Rickles, Frank Sinatra, Buddy Hackett, everybody in that place would look up to me and ...

The City of Angels has become a Dada delight ...

LAST SUMMER, holed up in Sound City Studios in the industrial pits of the San Fernando Valley, four musicians known collectively as 20/20 were deep ...

30 years of storytelling and Elliott is still ramblin' ...

IT'S 1:30 IN the afternoon when Nick Lowe pries open the sliding door of his West Hollywood hotel room and peers up at the sky ...