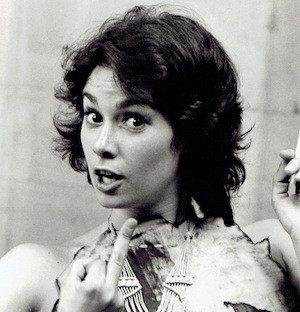 Born at a very early age, Susin Shapiro (now Susin Fair) broke into rock and rolldom at Crawdaddy, went on to the Village Voice, Rolling Stone, Circus, Sounds, the Daily News in NYC… and in 1993 began a 20-year stint at the New York Times as S.S. Fair... awesomeness reincarnate!

NEW YORK — It had to happen. The formation of a road show with the music of Lennon and McCartney had to be money in ...

Patti Smith: Somewhere, Over the Rimbaud

The Ramones: Grins and Groans with the Ramones

Everyone in New York has got the Ramones bug. Some people like the punks, others hate them but they sure don't ignore them. Nor will ...

Frank Zappa: Could a man who stamps on poodles and sings about lonely person devices become president of the US? asks Susie (spare the creamcheese) Shapiro

A WRITER FRIEND of mine is fond of saying: "If you fear something enough don't run scared, confront it directly." The idea being that no ...

IN CORNERS cut off from the rude-boy violence in poor black Jamaican communities, reggae music took seed, an offshoot of calypso, ska, R&B, and, further ...

A FUNNY THING happened to Milton on the way to Paradise. He discovered the devils to be more fascinating than the angels, and that gave ...

IAN DURY has fashioned New Boots and Panties!! out of the more vile and pernicious aspects of his social persona: he's the midnight rambler in ...

BRYAN FERRY, born in Newcastle, England, would make a perfect matinee idol. But though he has all the attributes — handsome, suave, with a slow-spreading, ...

PUNK AND PUMPKINS at the Palladium, turned for a night into a seance for Houdini. Garish garb and glorious: the human Quaalude, a walking cassette ...