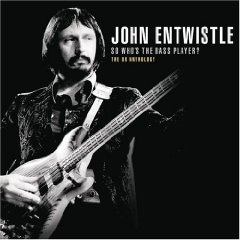 "Thank you Mother Nature/ For the way you got things planned/ Don't ever change a thing/ I'm happy as I am." ...

JUDGING FROM its state of neatness one would never guess that a member of the who was occupying a suite of rooms in the stately ...

John Entwhistle and The Bloody English

Profile and Interview by Chris Salewicz, Let It Rock, March 1973

JOHN ENTWHISTLE has always been an enigma. On the other members of the Who we can pin an identity. Townshend – creator and, at the ...

THE ROOM is deathly silent, apart from the occasional rumble of a stomach going by. We are gathered together on this day for a belated ...

JOHN ENTWISTLE is a happy man! He enjoys a reputation as one of the world's best electric bass players, he's had a decade of success ...

Mad Dog is everything you'd expect from a John Entwhistle album – and more. It catches Entwhistle in rabid transit, combining his obsession with 50's/early ...

John Entwistle: Is This The Right Man For Mayor of Acton?

'Momma's got a squeeze box she wears on her chestAnd when Daddy comes home he never gets no rest Because she's playing all nightAnd the ...

MY GENERATIONA LOT OF THE SOLOS I PLAYED WERE MUCH FASTER AND MORE interesting than the ones that finally went on the record. ...

Too Late The Hero: John Entwistle's Rigor Mortis Sets In

"WHAT I FEEL inside I can't explain. That John Entwistle should die in his late fifties is totally unthinkable. He was the indestructible one. He ...

IT IS A CLICHÉ THAT CELEBRITIES tend to be shorter in real life than they appear on stage. John Entwistle, who often wore brightly-coloured Cuban-heeled ...

THE NEWS OF John Entwistle's death reached me by email from LA via Pete Townshend's PA Nicola Joss in Las Vegas on Thursday night. ...

Paul Rees: The Ox – The Last Of The Great Rock Stars, the Authorised Biography Of John Entwistle

IN 1990, JOHN Entwistle spent two months in the region of Connemara on the west coast of Ireland, where fierce winds coming off the Atlantic ...

see also Who, The