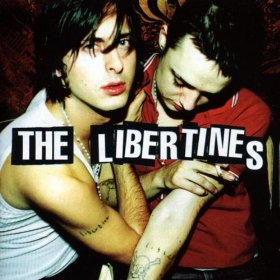 Patriotic punk whelps. They're having a "giraffe". ...

IT WAS A crisp autumn day when The Libertines arrived back in London to play the penultimate show of a 26 date tour at the ...

Those respected gentlemen of Albion, The Libertines, chose to limber up for Christmas with a typically debauched tour of mainland Europe. And, considering they fully ...

'We Believe In Melody, Hearts And Minds': The Libertines

Profile and Interview by Dorian Lynskey, The Guardian, 10 January 2003

PETE DOHERTY and Carl Barat – joint singers, guitarists, songwriters and ideologues of east London-based quartet the Libertines – are having an argument about an ...

Is Spain ready for the sex and drugs-fuelled invasion of The Libertines? ...

They're British punk's greatest hopes, yet they still live in a flat with no gas or running water. Welcome to the darkly romantic world of ...

AMIDST RUMORS of drug addiction and rehab, Libertines' singer-guitarist Pete Doherty has been out of commission for the past few weeks, skipping the band's European ...

The Libertines: The decline and fall of the Albion Empire

THE LAST TIME Pete Doherty and Carl Barat played on the same stage together was at the summit of the Libertines' explosive career in May. ...

PANTOMIME SEASON is upon us, and rock'n'roll's most compelling Punch and Judy show is in town. If the crowd packed into the Forum tonight aren't ...

CARL BARAT AND PETE DOHERTY COULD BE LOVERS; hell, I wish they were. On the cover of their eponymous second album, the singer/guitarists lean breathtakingly ...

IT'S LIKE THE dressing room of the Ziegfield Follies in here. Members of Dirty Pretty Things are shimmying around the photo studio, trying on jackets, ...

How to buy: Rough Trade Records

The Libertines: Up The Bracket

Before the supermodels, the drug busts and the tabloid fallouts, Doherty and Barat cooked up a little cracker. ...

Carl Barat's new tome doesn't shrink away from embracing ugly self-truth — and according to Ben Myers, is subsequently far worthier of praise than the ...

The Libertines: There Are No Innocent Bystanders

THE glittering embers of hope for a Libertines reunion were simultaneously stoked and dashed last week at the premier screening of The Libertines — There ...

Writing To Reach You

Because sometimes the only way musicians can actually talk to each other is by writing songs ...

The Libertines: Anthems for Doomed Youth

NOW THAT CARL BARÂT AND PETE DOHERTY have proven they are capable of collaborating again, they can go away and write a better album than ...

The Libertines: Anthems For Doomed Youth

IT’S ASTONISHING to discover that the long-running soap opera, The Libertines, has been mildly piquing the interests of the nation for just two years less ...

CARL BARÂT AND PETE DOHERTY produce some strong moments but without their youthful excitement it’s a rickety affair that wasn’t built for a huge venue. ...