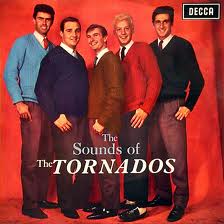 Bass guitarist wants to be a singer ...

Alan Smith On Film Sets With The Tornados and Tommy Steele

A HAUNTING theme-tune echoed across the stage of a dingy London theatre on Tuesday morning, as film cameras turned on that "Globetrotting" hit group, the ...

NMExclusive: Billy Fury by the Tornados

IT IS NOW almost fifteen months to the day that our group — itself only about six months old — played an audition to Billy ...

Heinz — Is He Right?

HAS HEINZ Burt done the right thing in leaving the Tornados? Or would he have been wiser to stick with the group until they had ...

FIVE TIE-less, tan-less Tornados trooped into the stately lounge at the Carlton Hotel, Great Yarmouth, and shocked the residents into silence as, none too quietly, ...

Billy Fury, The Tornados: It Took All Day — It Was Fantastic

WE WANT BILLY! IS BILLY FURY SINGING THE SONGS HE LIKES TO SING ...

The Tornados: Hamburg — Where We Big Beat Reigns

JOE MEEK, man behind the mammoth-selling 'Telstar' and many other hits, who was found dead with shotgun wounds in his Holloway, London, flat on Friday, ...

Retrospective and Interview by John Pidgeon, Let It Rock, December 1972

EVEN IF HE was born in Germany as the music papers said, we always suspected that Heinz's hair wasn't really that colour. It was his ...

A Tribute to Joe Meek— Far Out Before His Time

THROUGHOUT his career, British record producer Joe Meek showed a strong and consistent fascination with outer space and supernatural themes. A kind of backroom electronic ...

In 1999 Chris Welch interviewed singer and Tornados bass guitarist Heinz Burt about his early career and final years as a rock'n'roll legend. In this ...