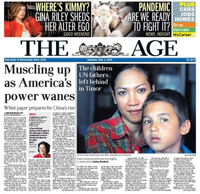 The Age is a daily newspaper which has been published in Melbourne, Australia, since 1854, and is now also available online.

CHRIS BAILEY — troubador. That may be a new tag to stick on the Saints' front-man, but it's a reasonably accurate one, at least at ...

Laughing Clowns: Neo-Realism and the Zeitgeist

Interview by Clinton Walker, The Age, 1984

IT'S AN OLD ADAGE that worthwhile art only arises out of conflict. Friction, after all, is what generates the sparks that light the fire. ...

The Triffids: Self-Sufficient and Surviving

Profile and Interview by Clinton Walker, The Age, 6 January 1984

THE TITLE of the Triffids' debut album, Treeless Plain, refers, of course, to the Nullarbor. That it also suggests the mood of the album itself, ...

INXS — a Group in Search of Identity

IF AUSTRALIAN pop music really equals that anywhere in the world, it must follow that that it can be equally as bad. ...

THE HOODOO Gurus don't beat around the bush. Right from the very outset, with the first track on their debut album, Stoneage Romeos, they stake ...

Nico: The Girl With The Faraway Eyes

THERE IS PERHAPS no world quite so cruel as rock and roll, where youth is everything, and with age comes not maturity but redundancy. Unless ...

Radiohead: Hail to the 'Head

Report and Interview by Stephen Dalton, The Age, April 2004

EVERY GENERATION produces a band that fiercely divides critical and public opinion, and nobody has carried that torch higher in the 21st century than Radiohead. ...