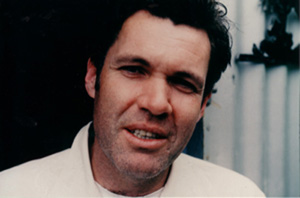 Clinton Walker is an art school dropout and recovering rock critic, a Sydney writer the Sun-Herald has called "our best chronicler of Australian grass-roots culture."

Since starting out in student newspapers and his own punk fanzines in Brisbane in 1977, he's published nine books, worked extensively in television, written millions of words as a journalist, produced and/or annotated a score of anthology CDs and been record-shop jockey, a DJ, and even a cook to the stars! After his first book Inner City Sound was published in 1981, Walker spent the rest of the decade on the freelance treadmill, as a star contributor to Australia’s two leading rock rags, RAM and Rolling Stone, and to all the leading local newspapers and magazines. His hillbilly-grunge band the Killer Sheep got run out of the Tamworth Country Music Festival in 1987, before posthumously releasing the single 'Wild Down Home' on Au-Go-Go Records in 1988.

Pulling back from journalism, he wrote four books in the 1990s, including Highway to Hell (his acclaimed, best-selling biography of Bon Scott), Stranded and Buried Country (a history of Aboriginal C&W). Going into the 2000s he moved into television, working on the film version of Buried Country plus, for the ABC, a number of programs, including the hit rockumentary series Long Way to the Top, the late-night live music show Studio 22, and Rare Grooves; plus he produced their soundtrack albums.

More recently, he's written more books outside music topics, but forged a relationship with US publisher Verse Chorus Press to keep in print for the world Highway to Hell and Inner City Sound. In 2012, he published History is Made at Night, a polemic in defense of Australia's besieged live music circuit, and in 2015, VCP published an updated new edition of Buried Country, which led the production of a stageshow version of the story, which Walker directs as it still tours the Australian festival circuit.

After producing the CD Silver Roads in 2016, an anthology of early '70s Australian country-rock/singer-songwriters, in 2018 Walker released his tenth book, Deadly Woman Blues, a graphic history of black women in Australian music. The publisher, however, quickly withdrew the book from sale and pulped it after it was accused of crimes against identity politics.

UPSTAIRS AT the Lansdowne Hotel in Sydney, Japanese all-girl psychobilly band the 5.6.7.8's are geeing up in anticipation of a performance. They change into matching ...

AC/DC: For Whom the Bell Tolls

EVERYONE AGREED that Peter Head had chosen his name well. The erstwhile Peter Beagley took his new name around the same time, in the early ...

AC/DC, The Easybeats, The Loved Ones, Johnny O'Keefe, The Saints, Les Welch: Overcoming the Cringe: A Potted History of Australian Rock and Pop

CHRIS BAILEY — troubador. That may be a new tag to stick on the Saints' front-man, but it's a reasonably accurate one, at least at ...

The Beasts Of Bourbon: The Ugliest Band On Earth

Preface to the Beasts of Bourbon songbook, Ten Years Behind Bars: From The Belly Of The Beasts ...

IN 1961 THE Gibb family – parents Hugh and Barbara and kids Lesley, Barry, twins Robin and Maurice, baby Andy – were living on Queensland's ...

AND SO THE Birthday Party finally — well what? ... "break up" seems an inadequate term. Implode? OD? Burn-out? It's a difficult task to do ...

THE BIRTHDAY PARTY are probably the most important rock band Australia has ever produced. They made music that was blatantly rock at a time when ...

THE BOYS NEXT DOOR'S career has been a turbulent one. In just two short years, they've recorded for three different labels: Suicide, Mushroom and now ...

I CAN STILL remember my first joint. All the usual jibes notwithstanding (memory loss, not inhaling, whatever), I remember it vividly: It was at the ...

"JOHNNY CASH DIES": It's a headline that some of us, with more than a tinge of sadness, have been dreading to see for some time ...

IN 1955 WHEN John Coltrane replaced Sonny Rollins in the new quintet Miles Davis was getting together, jazz was at a turning point – and ...

AUTHOR'S NOTE: Extracted from the Meanjin Anthology, edited by Sally Heath and published by Melbourne University Press in 2012, after it was first published in Meanjin magazine in ...

Deep Purple, george: Worst Idea in the History of Music: Concerto for Jon Lord and george

AN EMAIL ARRIVED for me a little while back, just after the program for the 2003 Sydney Festival was released. Titled THE WORST IDEA IN ...

IT WAS ABOUT two years ago. In Brisbane, at Baroona Hall, the Survivors and the Leftovers were playing... ...

THE QUEENSLAND Music Festival, which is launched next Friday with a dawn concert in Winton and runs for a fortnight till July 29, is an ...

THE HOODOO Gurus don't beat around the bush. Right from the very outset, with the first track on their debut album, Stoneage Romeos, they stake ...

INXS — a Group in Search of Identity

IF AUSTRALIAN pop music really equals that anywhere in the world, it must follow that that it can be equally as bad. ...

Laughing Clowns: Neo-Realism and the Zeitgeist

Interview by Clinton Walker, The Age, 1984

IT'S AN OLD ADAGE that worthwhile art only arises out of conflict. Friction, after all, is what generates the sparks that light the fire. ...

One of Australia's most innovative and exciting new progressive bands, Laughing Clowns, arrives in Adelaide today for the first of four gigs, at the Tivoli ...

Mental as Anything: Murray Waldren: The Mind and Times of Reg Mombassa

Note: This piece never got published. It was commissioned by Australian Book Review magazine but not run, for reasons never given, and certainly wasn't paid for.  I ...

It was always easy to make fun of Kylie Minogue. But now, having turned 21, she's started to take more control of her career and ...

Nico: The Girl With The Faraway Eyes

THERE IS PERHAPS no world quite so cruel as rock and roll, where youth is everything, and with age comes not maturity but redundancy. Unless ...

THE NEWS THAT the Scientists are about to leave Australia — as permanently as is possible — will doubtless barely cause a ripple in Oz-rocks ...

Sunnyboys: Get Some Fun (Mushroom)

THE SUNNYBOYS are a group who had success — or near-success, at least — thrust upon them at an early age, and although it's to ...

The Triffids: Irony and Distance

Interview by Clinton Walker, The Next Thing, 1984

THE TRIFFIDS fairly well defy convention; their seeming contradictions only make them stronger. They come from Perth, capital of raunch'n'roll and birthplace of the Scientists ...

The Triffids: Self-Sufficient and Surviving

Profile and Interview by Clinton Walker, The Age, 6 January 1984

THE TITLE of the Triffids' debut album, Treeless Plain, refers, of course, to the Nullarbor. That it also suggests the mood of the album itself, ...

AT A TIME in the late '60s when the hippies were preaching peace and love – as they would have it, in short, a whole ...

Retrospective by Clinton Walker, The Australian, 2007

I USED TO have this attempted joke I'd pull out at sagging Sunday afternoon barbeques when I wanted to leave. Oh well, I'd say, I ...

ANTHONY O'GRADY, who died on 19 December, was the Godfather here in Australia. He was the writer/editor/publisher who transformed Australian rock journalism and music magazines, ...

Iain McIntyre: Tomorrow is Today: Australia in the Psychedelic Era, 1966-1970

IAIN MCINTYRE'S first book, 2004's Wild About You!, was unfortunately a very limited edition, published by – of all people – the Community Radio Federation ...

ROCK JOURNALISM is, of course, the lowest of the low. Trust me, I know. It has recently enjoyed improved profile with films like High Fidelty ...

"ATTITUDES TO CASSETTES are changing," says Andy Maine, co-producer of Fast Forward cassette magazine. "For so long they've been the little brother or sister of ...

I GREW UP in a house without music. In suburban Melbourne in the 1960s, we had a spindly-legged (black and white) TV whose blonde-wood finish ...