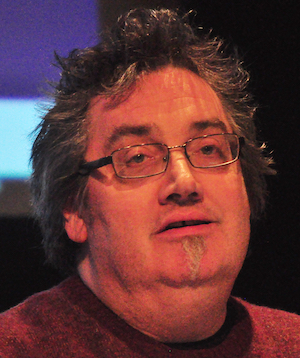 Aug 77: my sister Becky buys me an NME to cheer me up ill in bed: Wayne Kramer’s prison mugshot is on the cover (buying Sounds and NME at this time often requires a long walk across town as not everywhere stocks it)
1981?: in reaction against stupid review of first Raincoats LP, I stop reading Sounds forever.
1981-82: review printed in Zigzag (of The Fall).
Late 83: reviews being run in NME; relevant section editors lukewarm at best.(I am not very good yet, but luckily refuse to acknowledge this).
March 85: if The Wire is excited someone young-ish has begun reviewing for them, they hide it well.

Mark Sinker on the RBP podcast

2005 note: Collapse of post-comm Balkans into internecine war hinted at, kinda. Well, only if you read WAY between the lines I think. Another submerged ...

AR Kane: A Steak Knife In Your Ear

2005 note: NME had become a prisoner of its late 70s success legitimising punk: terrified of being caught in the lee of whatever the "next ...

In the 20 years since Lester Bangs wrote his 'Reasonable Guide to Horrible Noise', the multi-mediated world has largely assimilated the hostile sounds he espoused. ...

Profile and Interview by Mark Sinker, The Wire, February 1992

SIX COMPOSERS, too shy to make claims for themselves, go to make it up. But Brian Hodgson, who's worked with the BBC Radiophonic Workshop since ...

The small man with the enormous moustache who examines passengers' bags for terrorist devices at the Air Ethiopia check-in desk has a problem. Every time ...

2005 note: Savage Pencil did a nice illustration for this: John and Yoko hilariously naked, among other excellent things. It also elicited an angry postcard ...

Report and Interview by Mark Sinker, The Observer, 27 November 1988

HE ISN'T, of course. He's Mr James Brown, the Godfather of Soul, the Funky President, the Original Disco Man. He's a numbing backbeat tightened to ...

James Brown: Stay On The Scene Like An Answerin' Machine

IN TEXAS, even daylight isn't ordinary. You can stay indoors and sleep, hide from the noon-time sun that way, but the overlit world outside is ...

OF THE alliance at the heart of the original Velvet Underground, John Cale writes: "We hated everybody and everything. Other musicians were viewed as competition. ...

Jean Carne: You're A Part Of Me (RCA LP/cassette/CD)

IT'S A SECRET inland sea, this late-nite soul: and Jean Carne's voice is an inlet in that sea, away from the wrong of the world. ...

THERE'S PREJUDICE and there's prejudice, but answer me this — what kind of a narrow soundworld do you have to be living in for the ...

SONGS HAVE become fragile. The things that held them together – the value of the individual voice, the neat edges of recorded product – are ...

2005 note: Much of the cultural rhetoric surrounding funk is just teacher’s-pet attempts to plod-cram the music back into the squarest box available – I ...

Elvis Costello: Can I Be Frank…?

2005 note: The original manuscript began and ended with some kind of lyrical gibberish swansong for the song as a music-form (in the age of ...

2005 note: It’s not a sensible criticism of a conjuror that his craft does not involve actual real magical powers. Eno is fascinated by the ...

The Fall: Watching The City Hobgoblins: The Fall

Profile and Interview by Mark Sinker, The Wire, August 1986

Author's 2005 note: In which I find my voice? In between all the "important rock does this" droning. ...

The Fall, Madness, The Smiths: England: Look Back In Anguish

"Oh, grassy dale and lowland scene/Come see, come hear the English Scheme!" (The Fall)"You might sleep, but you will never dream/Oh, Manchester! So much to ...

...(ROCK IS dead?) I think we can do better than that. The thing about Felt (which was that they sounded like everyone else) hasn't changed. ...

OH. EVERYTHING hasn't quite changed, after all. Frith's excellent retrospective last year, Step Across The Border, seemed to demonstrate how much more New York and ...

As the AIDS epidemic spreads and all pop can do is turn a blind eye, Diamanda Galas is the only singer left to stand and ...

THEIR FIRST champions over here told Galaxie 500 that the fabulous clammy whine of their music (electric, but only just) was the sound of the ...

Profile and Interview by Mark Sinker, The Wire, March 1990

Guitar and bass tune up for the next wave of sonic assault, from Blind Willie's blues to M-BASE and beyond. Our man behind the amps ...

Profile and Interview by Mark Sinker, The Wire, January 1988

"I pre-empted the Doctor Martens thing, you know." ...

2005 NOTE: This piece is a mess, though the underlying concept was good, and besides, the whole paper was a mess at this stage. I ...

The Lounge Lizards: No Pain For Cakes (Antllles)

LURIE SAYS he's got stuff to make Tom Waits weep. And this collection, has a verve and nerve to justify his sly pride. Something to ...

2005 note: My very first full-length music piece for NME? I so much wish Youssou had not let himself be kidnapped by P.Gabriel. Marcello Carlin ...

NWA'S DEBUT, with a high count of F-words, savaging of bad policing, and ambivalent depictions of LA street drug-dealers, teen-gang wars and urban ruin, has ...

IF PUNK was an ugly kid's crazed revenge on old age, an obliterating mayhem, there were other ways the clogging and the arrested adolescence of ...

PIXIES QUOTE The Fall (a mangled snatch of 'Stephen Song' in 'I'm Amazed'), so we can: "They pass my home at night/oh they are NOT ...

PERHAPS THE most unexpected thing about RCA/BMG's Presley-project is how unexpected so much of it is. ...

JUST LIKE a dilemma, present-day Paganism has two horns: the old lore and its new form. Except it isn't always entirely clear whether those horns ...

Public Enemy, Sun Ra: Loving The Alien In Advance Of The Landing

"IN THE MEANTIME," he said, speaking relentlessly but mesmerically softly, as gurus will, "I finally went to Chicago. I determined not to be a musician ...

"LAST NIGHT we were onstage, and it was like people were screaming and stuff, thrashing around – I don't know, it's like my initial reaction ...

RAIN TREE CROW may be a one-off reformation of Japan, but they wouldn't want to be trapped by any of the preconceptions in that. The ...

The Shamen: No Right To Party: Acid House

2005 note: Unforgivable as actual real journalism – I made no effort to represent the anti-drug position – this still works as a snapshot of ...

Paul Simon: The Boy in the Boycott

Is PAUL SIMON "a genius and a loathsome coward"? Does the lack of anti-apartheid statements on Graceland amount to condonation of Botha's regime? Or has ...

I GET BACK to Bay Ridge just after midnight, to find the guys in the house watching Sonic Youth on Night Music in the room ...

FLOWERS IN THE DUSTBIN ...

2005 note: I don’t think I ever played one of their records ONCE in all the years since I interviewed them (haha a "sensible Clash" ...

THE WILD white girl of Motown (rtd.) links up with Rick James again, and reminds us of a whole slew of things we were forgetting ...

"Bunny had fashioned a guitar out of a large sardine can with a bamboo stalk and electric wires. Another friend, Peter MacIntosh, obtained a real ...

Was (Not Was): Disco Infernal

Covid has pushed pop culture into nostalgia. It's time for something new

Hopefully this crisis marks the high tide of the tendency endlessly to remake, remodel and recycle the past ...

The story of the first electronic instruments is as twisted and circuitous as their primitive, labyrinthine wiring. Mark Sinker goes in search of these often ...

The explosion of music streaming platforms in the 2010s makes Mark Sinker yearn to get back off the grid ...

The Doubts Aired As Gags: Three Decades of Cross-Cultural Utopianism in UK Music-Writing

Extract from Mark Sinker's introduction to A HIDDEN LANDSCAPE ONCE A WEEK: The Unruly Curiosity of the UK Music Press in the 1960s-80s, in the words ...